THE SURPRISING SECRETS OF THE RICH 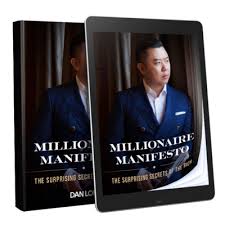 In this eBook you'll discover the uncommon secrets of the Real-World Millionaires.

...wondered why some people are wealthy, while others – maybe even you – are not?

...noticed that wealthy people aren't always the most educated, the hardest working, or even the smartest?

...wondered what wealthy people have in their minds that maybe others, even you, may not have right now?

Dan Lok have been in business for more than twenty years now.

Dan Lok have seen some people go on to great success.Many Have Become Millionaires, Some Even Billionaires
Yet still others – using the same principles they learned from the same sources – aren’t doing very well.
Some even went bankrupt.
What’s the difference?
It is really luck? Take two people.
They can even be a set of twins born of the same parents, with similar backgrounds, experience, and education.
Give them both the same set of tools.
Let’s say you give them both a shiny new hammer, a box of nails, and a few planks of wood.
What will you discover? One will do well. The other may not.
One may build a dog house. The other may not build anything at all, saying “I’m not a carpenter.”
One may build a lemonade stand and go into business.
The other may build a stool and sit on it.
Again, what’s the difference?
These perennial questions are perhaps more timely than ever.
The Millionaire Manifesto Answers Them In The Unforgettable Voice Of A Very Wise Millionaire
It follows the journey of a young man who was just fired from a job that was supposed to be safe and secure.
Without a job, and still living with his single mothers who’s struggling to pay the bills, he’s presented with a choice:
Either find another job that will accept an inexperienced young kid so he can help support his mother.
Or discover what it takes to become successful from a mysterious businessman who appeared one day offering advice.
This one decision not only affects the rest of this kid’s life, but his mother’s as well…
How will their lives turn out?
In practical, easy-to-understand lessons, he reveals the ideas and actions that can give anyone the mentality of a millionaire.
Millionaire Manifesto Contains The Secrets That Make Men And Women Wealthy
This book will help you create a new wealth mindset.
Get instant access - get this ebook right now by clicking the Add To Cart button.
Read it. Soak it up. Use it.
Get the book now