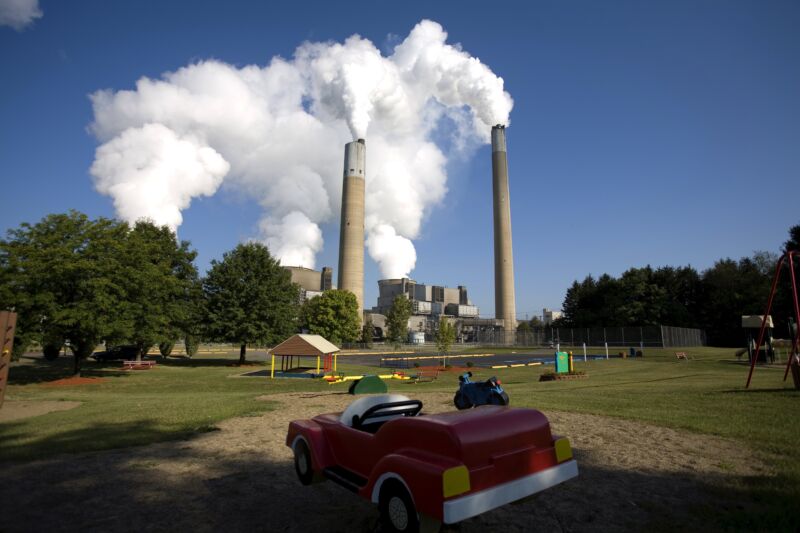 Enlarge / Coal smoke and steam vapor pour out of the Bruce Mansfield Power Plant across from a largely abandoned children's park on September 11, 2008, in Shippingport, Pennsylvania. After two enormous toxic coal soot discharges in 2006 and 2007, the children's park was rarely used. The 2,460 MW coal-fired plant wasn't fully decommissioned until November 2019.
Burning fossil fuels kills more than 1 million people ever year, according to a new study that examined the worldwide health effects of fine particulate pollution, also known as PM2.5.
Coal, which produces sooty, particulate-laden pollution, is responsible for half of those deaths, while natural gas and oil are responsible for the other half. Some 80 percent of premature deaths due to fossil fuel combustion takes place in South Asia or East Asia, the report said.
“Our key objective was to identify major sources of PM2.5 pollution and to understand how these sources change around the world,” Erin McDuffie, the study’s lead author and a research associate at Washington University, said in a statement. “In some countries, our results are some of the first pieces of information they have on the major sources in their region.”
Because fine particulate pollution can be so easily inhaled and swept into the bloodstream, it is responsible for a range of diseases, including heart disease, diabetes, COPD, lung cancer, and stroke. More recently, researchers have found links between PM2.5 and other, less obvious diseases like kidney failure and Parkinson’s. People who have experienced long-term exposure to PM2.5 are also at greater risk of hospitalization if they fall ill with COVID.
The researchers gathered monthly pollution and source data from 1970 to 2017 and ran it through a global air-quality model in conjunction with satellite data. The result was a global map of outdoor PM2.5 with a resolution of about 1 km2. From there, they estimated the average outdoor exposure for people living in various parts of the world. The study was coordinated by the nonprofit Health Effects Institute, and its coauthors were Randall Martin, a professor of energy, environmental and chemical engineering at Washington University, and Michael Brauer, a professor of population and public health at the University of British Columbia.
In regions like South Asia and East Asia and some Eastern and Central European countries, coal causes a majority of the premature deaths that result from fossil fuel combustion. That’s due in part to those regions’ reliance on coal and because their regulations are typically not as stringent as elsewhere.
In regions like North America and Western Europe, which are less reliant on coal, oil and natural gas cause the majority of deaths from fossil fuel-related particulate pollution. Even in the US, a country with relatively stringent clean air laws, fine particulate pollution from fossil fuels is responsible for about 20,000 deaths annually, according to the study.
The organization, which is based in the District of Columbia, says it “typically receives balanced funding from U.S. Environmental Protection Agency and the worldwide motor vehicle industry.” This particular study, it said, was funded by Bloomberg Philanthropies. Though it was not published in a scientific journal, it was reviewed by experts who are not involved in the institute’s studies.
Because the study attempted to estimate the global effects of fossil fuel particulate pollution, its findings probably aren’t as accurate as one that might focus on a single region or country. The certainty of the results also depended on the quality of the underlying data—some countries collect higher-quality air pollution data than others.
This isn’t the first study to link PM2.5 exposure with early death, but it one of the more geographically extensive reports, putting into context one part of the global burden of fossil fuels.